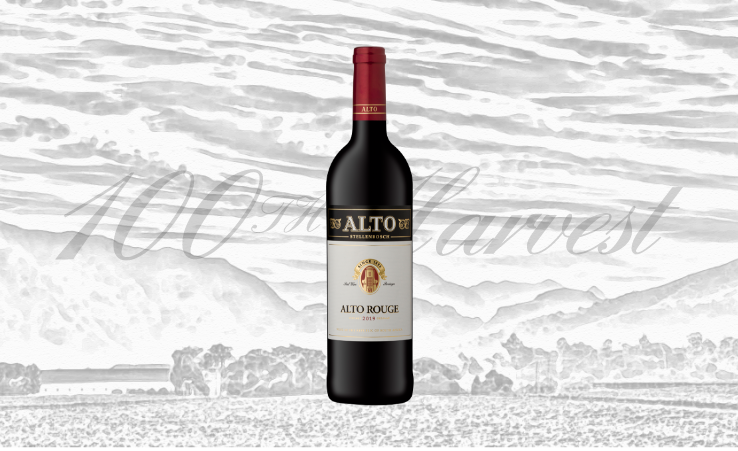 Born from the exceptional terroir of the Stellenbosch Winelands, this Alto red is renowned for its full-bodied and rich with ripe but elegant tannins.

This wine is made from grapes of north-facing vines, between 10 and 16 years old, that grow in decomposed granite soils and clay subsoil situated at altitudes of 135m to 500m above sea level. The vines on the higher slopes are fanned by the cooling maritime breezes from nearby False Bay. A seven-wire Perold trellising system is used, which yielded an average of 8 tons per hectare.

The grapes were harvested by hand at the end of March at 24º to 26º Balling. After destalking and crushing, the mash was fermented in stainless steel tanks at 25º to 27ºC, using the selected yeast culture. The juice was separated from the skins after 14 days. After malolactic fermentation, the wine was racked into first-, second- and third-fill French oak barrels and matured for 18 months.

Taste: Deep, rich and intense with great balance between structure and finesse. Fine grained tannins. Generosity of texture and depth.

Food pairing: Excellent enjoyed on its own or served with red meat dishes and casseroles.

Alto, situated on the slopes of the Helderberg Mountain in the Stellenbosch district, dates back to 1693 when it was part of a much larger farm called Groenrivier (Green River), granted to a free burgher by Governor Simon van der Stel. In 1919 the owner of the farm, Hennie Malan, sold off half the land to his brother-in-law and set about planting vines on his remaining portion, focusing exclusively on red varieties. He named the farm Alto, a reference to its altitude (some slopes rise as high as 500m above sea level) and his striving for excellence. Alto has 93 hectares under vines. The trellised vineyards cling to the high granite slopes, ideal for the cultivation of red wine varieties.